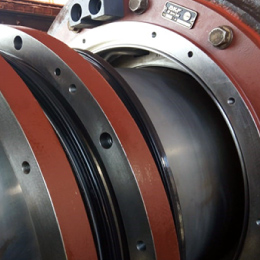 Metalock Brasil, Rio de Janeiro branch, was called in to perform repair services at a shipyard situated in Guanabara Bay/RJ.

The old model system was for conventional, non-biodegradable oils. This new box, is suitable for use with EAL type oils (Environmentally Acceptable Lubricants) which are environmentally acceptable, biodegradable, minimally toxic and non-bio accumulative lubricants – as defined in Appendix A of the VGP (Vessel General Permit) of 2013, – a permit required for vessels with a total length of 24 metres or more, entering the waters of the United States of America.

The conversion was carried out quickly and the assembly of the new box could be done soon after the propeller was removed. It was not necessary to machine the chrome steel jacket because it was in perfect condition.

After the assembly of the new model and commissioning – filling with new EAL type oil in the telescopic stern tube and header tank, the Metalock technicians carried out the alignment of the assembly and tests, being able to verify that they did not present leaks.