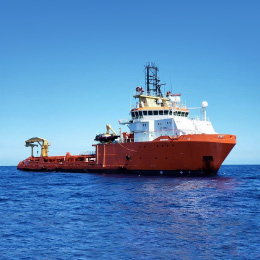 In June 2020 Metalock Brasil attended an Anchor Handling platform supply vessel in Guanabara Bay to repair one of its two Bergen main engines, model No. B32/40L9 – the crankpin of cylinder No. 4 was damaged.

Inspection on board by Metalock Brasil’s specialist in-situ machining technicians revealed that the crankshaft’s No. 4 crankpin had white metal melted onto its entire surface, as a result of overheating.

In preparation for the repair, the technicians performed a hardness test, dimensional assessment of the crankpin, Magnetic Particle Inspection to determine the presence of cracks and a Run-Out Alignment test to check for the straightness of the crankshaft. The hardness test revealed excessive hardness, requiring stress relieving heat treatment, a specialist process effected by a partner of Metalock Brasil.

Upon completion of the heat treatment, with successful results, Metalock Brasil machined and polished No. 4 crankpin, removing 1mm in diameter, leaving it within the maker’s dimensional tolerance (0.03mm) and surface roughness (0.02 Ra) . Subsequently, polishing was performed on main journals numbers three and four.

After assembly of the engine by the crew the engine was tested during a sea trial to the Owner’s satisfaction.

Metalock Basil provided a turnkey solution start to finish for this repair.