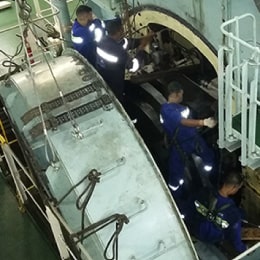 Metalock Brasil has replaced the seals and springs in the shaft vibration damper of a vessel’s main engine in the port of Santos, on the Brazilian São Paulo State coast, the largest port complex in Latin America.

The outer cover had to be removed, in view of access to the compartment through No. 1 cylinder crankcase was not feasible. Thus, Metalock Brasil technicians accessed the main engine shaft vibration damper and performed the replacement of seals and springs.

The lubricating oil lines for the shaft vibration damper and damper cap were removed.

The shaft vibration damper cap was removed to allow better visual inspection of the shaft surface. After analysis and the guidance of the chief engineer, it was decided not to replace the seals and spring of the front surface of the shaft, since it was scratched.

Metalock Brasil technicians found the central seal channel also blocked. The central position seal and spring were found to be totally destroyed, as well as the rear seal and the front spring.

The repair was successfully performed by Metalock Brasil technicians and the seal and spring were replaced in the rear position also. The top cover and shaft vibration damper lubricating oil lines were reassembled.

The work was inspected by the vessel’s chief engineer.